Skip to main content
Labels
Posted by Michael Katsimbris May 01, 2015

For any of you podcast listeners out there, you'll know that I've decided to rebuild my Subaru's engine.

For those of you that don't know, or listen to the podcast, I decided to take on this very expensive project when my 2005 Subaru's cam seal started to leak. You can ask around, and while many people will do the service within the engine bay (dealerships), the two people whose opinion I seek out the most told me that the best procedure would involve taking the engine out of the car. With Subaru's horizontally opposed engine layout, only taking the engine out of the car would ensure that new seal could be placed properly.

When that news became clear, my friend, and proprietor of Delaware Speed & Custom in Milton, DE, Andrew Ockels, asked me, "That's not all you're going to do, is it?" Indeed, after more than 9 years of ownership, and more than 130,000 miles, doing all that work just for replacing 4 cam seals would be a wasted opportunity.

One of the many issues with building an engine, isn't just the money, but rather, it would be a waste to spend all this money on a great new engine with better internal parts to handle what I do with the car (autocross, etc), only to stick the stock top end parts back on.

And in order to make more power, power that this build will be able to handle, THAT requires EVEN MORE money to change out those parts. So, to say that my initial excitement was tapered, is an understatement. But I will do what I can to continue to save money for engine components beyond the bottom end.

Let's just put some numbers into this, so you know what I'm talking about. I'll start off with Perrin, and this is probably the cheapest actual name brand to put on the car. A brand name that many people have had problems with in terms of fitment and installation. And for the amount of power the engine could handle, let's go with stuff that will go around a GT35R turbo.

Some more name brand, or name brand mix and matches gets us to $6,800+. And, please don't think that I don't know there are tons more parts and work that goes into how this will work. But, what I'm telling you is that I'll be spending WAY more on the other stuff that goes onto the engine than the actual engine.

Couple more things need to be stated, which are that this wouldn't even be possible without Andy @ Delaware Speed and Custom. And if you have trouble looking him up it's because he is indeed that insanely busy. And he also focuses on diesel work anyway. Everything awesome that comes out of this will be because of him and his knowledge base. Any lacking of Subaru knowledge has always been made up by 15 years experience as a master tech, and having one of the most gifted mechanical minds ever seen. I'll do my best to back him up with any research I can do, and the knowledge base that is contained in Bryan DiSanto's syphilitic riddled mind. (That's a joke, I sincerely hope everyone can see that; Bryan has no actual Subaru knowledge.)

In any case, the project has started, and I'll be posting every step I take.  Here are two pictures of Andy working on the car. The first step, removing the old engine, is completed. 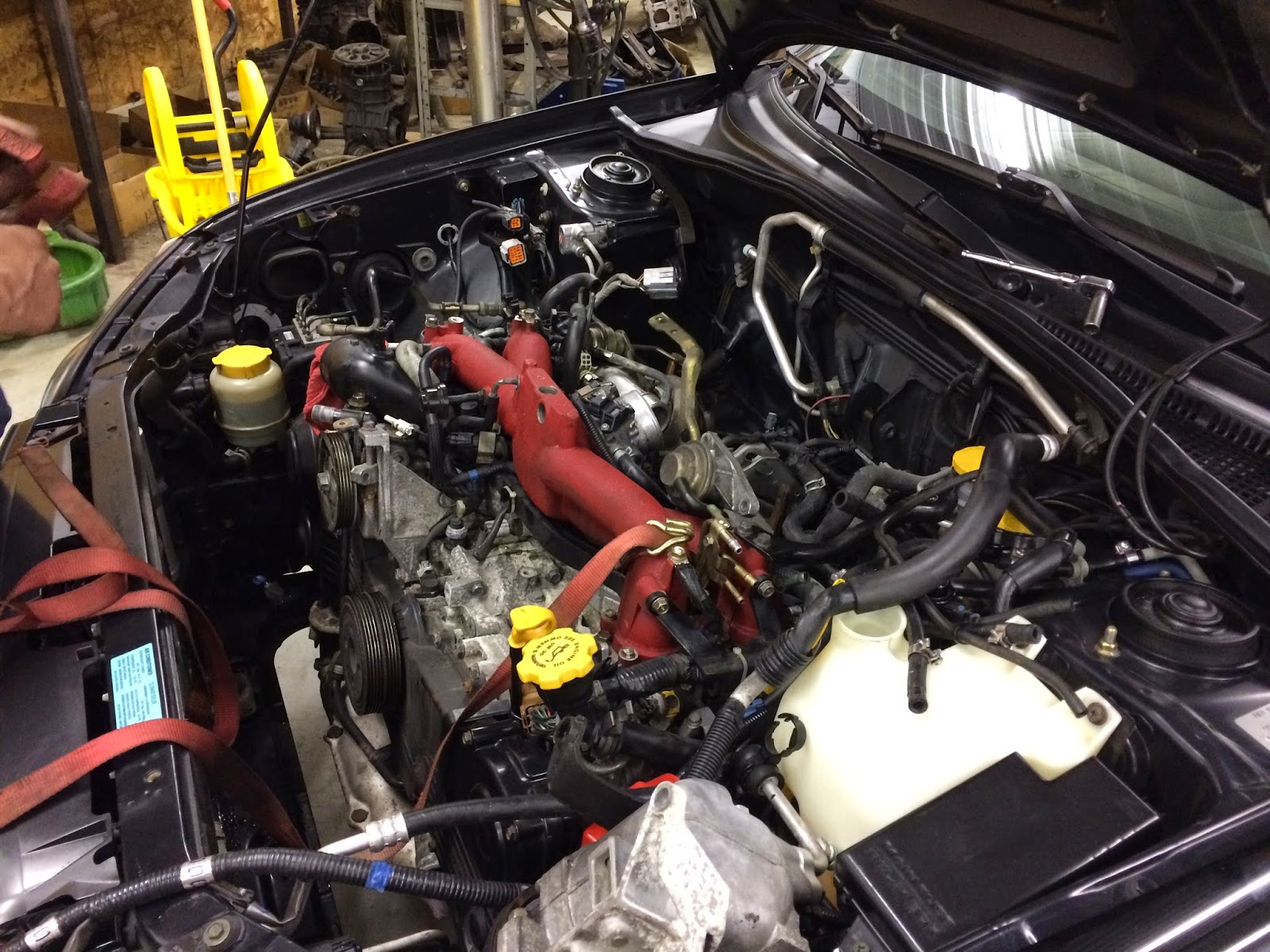 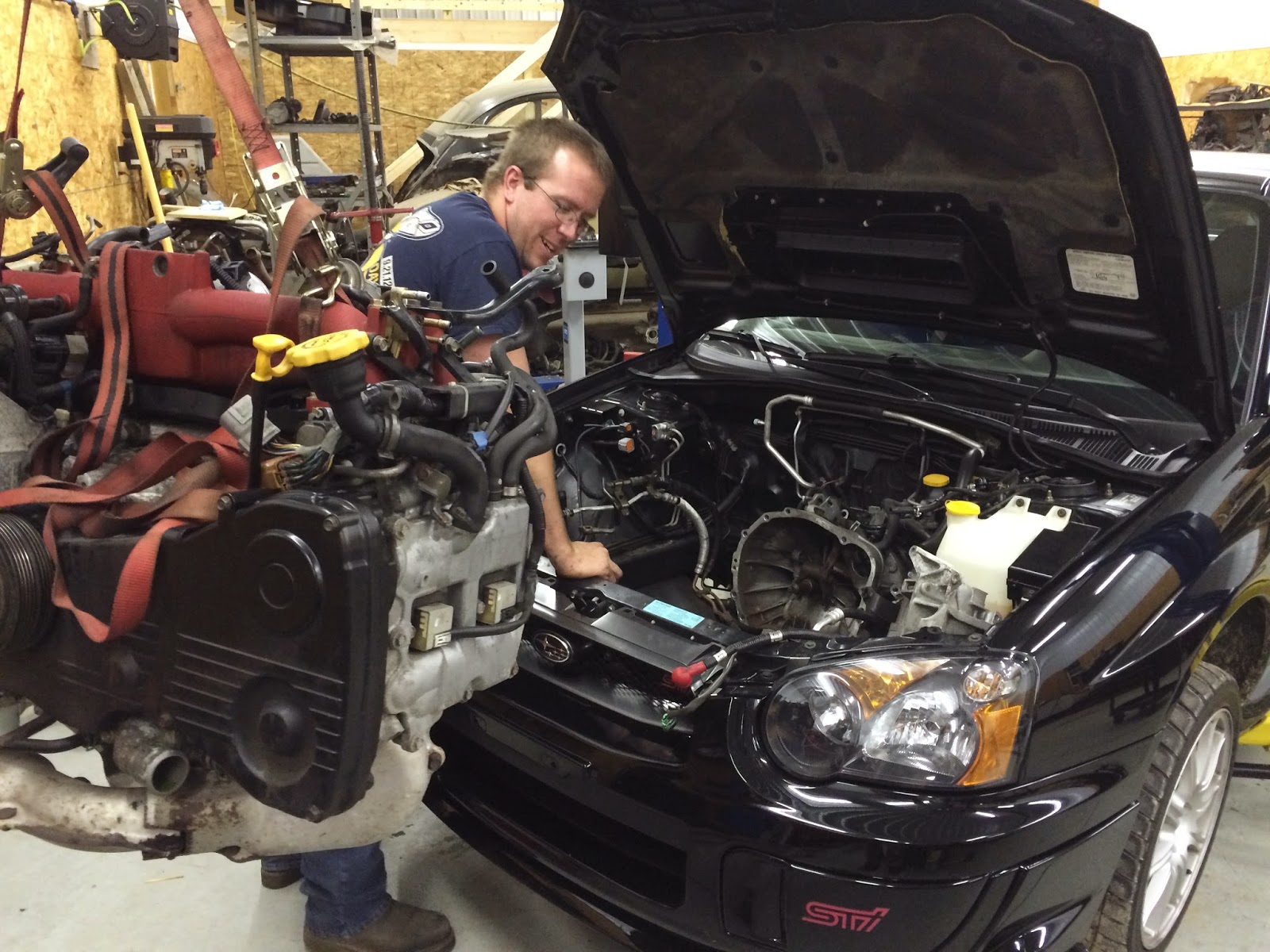