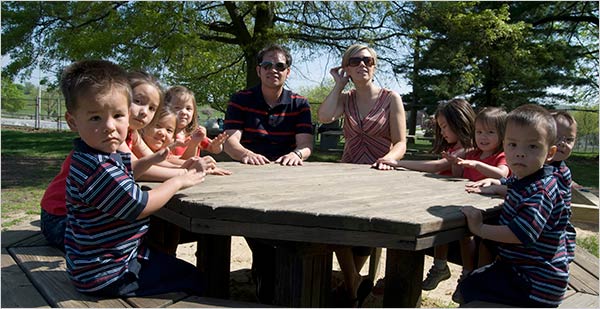 I've never watched an episode of Jon & Kate Plus 8 but my girlfriend is addicted. Knowing her viewing habits, Jon & Kate Plus 8 must be a fanciful deluge of well-produced escapism. But that which entertains my girlfriend and a million other women has come at a very steep price:  Jon and Kate sold themselves and their children to the devil.

I don't mean devil in the theistic sense.  I mean devil in the Hollywood sense. In Hollywood, money is infinite because its consumer base reproduces into infinity. As long as a profit compelling storyline can be constructed, the product stays on the shelves. When Jon and Kate signed, I'm sure their intentions were good. The steady revenue meant that they could purchase whatever their brood required. If they couldn't, chances are they could get it free of charge.

But their paycheck is only a small fraction of the total profit that their celebrity produces. Salaries are paid upon the backs of the Gosselins. As well, as their viewership inevitably declined and USA Today stopped prominently featuring the family, advertisement for the show began appearing in tabloids and harmful and provocative narratives had to be created.

Hollywood and the Gosselins will inevitably part ways. Because the parents will still be tabloid fodder and because the children will spend the next decade or so coping with their parents' divorce and what I presume will be a kooky custody agreement, I think that, in the long run, this experience will be a significant net loss for the family. The symbiotic relationship between the producers of Hollywood and the consumers of the world can be likened to a marriage. As such, Jon and Kate turned their twosome into a foursome creating an unfortunate system that was destined to fail.
Labels: Blogasms