Skip to main content
Labels
Posted by Will January 18, 2009

"I've said it before and I'll say it again: democracy simply doesn'twork." 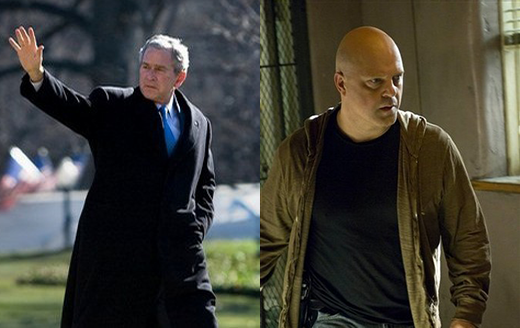 "Well maybe in your own mind, amigo. But in the real world, I don't answer to you. Not today, not tomorrow, not even on Cinco de Mayo." – Vic Mackey

"I have always acted with the best interests of our country in mind. I have followed my conscience and done what I thought was right. You may not agree with some tough decisions I have made. But I hope you can agree that I was willing to make the tough decisions." – George W. Bush

Both men existed within a world of violence and, like every megalomaniac that preceded them, they unabashedly lied about their intentions. They claimed they wanted peace—a peace that, they contended, could only be achieved through warfare against those enemies whose motives could only be understood by them and whose beliefs and actions were inherently unrighteous. Because they believed that they possessed a quality of righteousness at a quantity that imbued their violence with merit and distinction, their actions, products of "tough decisions," were not subject to review.

In reality, both men understood that the only way to obtain and secure more than their fair share of a limited resource is to be more violent than the competition. Unfortunately, their proclivity to hide behind their "duties" when convenient ensured that they were shielded from the consequences of their failure to foster cooperation and fairness. At the end of The Shield, Vic Mackey walked free while his family hid from him in witness protection after one of his partners was arrested and another committed suicide.

On Tuesday, George W. Bush walks free despite the consequences of his tough decisions: He screwed a well-intentioned workforce by refusing to act for oversight and regulation, he ensured the death and disability of hundreds by authorizing torture and of hundreds of thousands by authorizing two wars, he destroyed the lives of millions by embracing sycophants who would be the architects of two amateurish post-invasion strategies, he hamstrung empirical inquiry by accepting the advice of false prophets, and he encouraged the subversion of personal responsibility by heralding the virtues of good intentions.

Though cognitive dissonance undoubtedly exerts a major influence, it’s impossible to argue that history will reclaim either man’s integrity. Both men understood the enemy only because they actively pursued a role as someone’s enemy by creating disorder in order to achieve an untenable end. Incidentally, like Mackey, the means to Bush’s ends have been digitally recorded and preserved. Bush’s legacy cannot be whitewashed. Only through the tireless efforts of those who confuse brashness with dignity will history endear itself to his actions and find itself callously doomed to repeat.
Labels: Politics