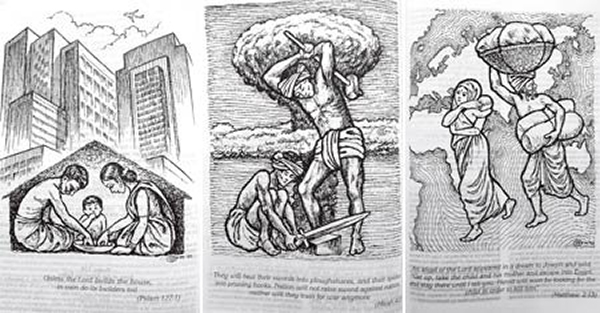 In a move that will surely be feverishly condemned by the Dominionism sect, the Catholic Church has released the New Community Bible, a bible that is meant to spread religious propaganda throughout India through the subversion of Indian traditions. Jeremy Page covers:


"I am sure this Bible, made in India and for Indians, will bring the word of God closer to millions of our people, not only Christians," Oswald Gracias, the Archbishop of Bombay, said at a ceremony on the Bible's release.

Produced by the Society of St Paul, the Bible is the first in this nation of 1.1 billion to be written in simplified English. It features 27 sketches of typical Indian scenes: one shows a family in a slum beneath skyscrapers. Mahatma Gandhi and Mother Teresa also feature in lengthy notes interpreting the text for Indian readers.

The notes even quote Hindu scriptures, such as the Ramayana and Mahabharata epics, to help to explain Christianity to prospective converts. "We wanted to show the parallels between the themes in the Bible and in Indian religions," Father Tony Charanghat, a spokesman for the Archbishop, said. "We've put the sacred text in a local context."